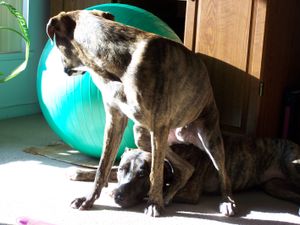 Dogs are social creatures; consequently, social animals socially learn from one another. It sounds redundant, but it is true. Life is not all about behaviourism. Other learning theories apply to dogs, and today we will look at social learning and locus of control. Perceived control is a fundamental component of wellbeing. Human and non-human animals need to know they have some control over the outcome of their lives because it makes them feel good.

Dog Locus of Control
Locus of control is the perceived control one has over the outcome of life events. If you are at a party and feel uncomfortable, your perception of leaving or staying reduces stress or anxiety because you know you can walk out the front door at any time. If the door is locked, your stress and anxiety will increase and possibly turn into a panic because you have no control over staying or leaving. It is essential for social animals to have control, or at least perceived control, over their environment and lives. Dogs are not exempt from this rule.

Dogs who have some control over their environment are generally less reactive, aggressive, fearful, stressed, or anxious. Animals behave more efficiently when the outcome of a situation is socially and cognitively predictable; consequently, classical and operant conditioning is by far the only training options. 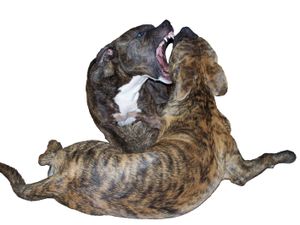 You can classically or operantly train a behaviour, but ultimately, the perception the dog has about an event might not change. Emotions are good predictors of behaviourism failure. You can train a dog to sit in front of a firecracker yet it remains fearful of the stimulus (the noise). Yes, behaviourism addresses conditioned emotional responses, but social learning tells us results can be achieved much faster if the dog has a relationship with the human and has gained control over its environment as a result.

Dog Social Learning vs. Behaviourism
The old school dominate or be dominated mentality is an outdated and ridiculous idea that essentially boils down to removing (read punish harshly) all the dog’s possible control options. First, dogs do not care about world domination. Secondly, control and dominance are not the same. Dominance is a form of influential power between two members of the same species: dogs dominate dogs, humans dominate humans. Control is knowing or predicting the outcome of a behaviour.

Locus of control is the perceived outcome of an event based on internal motives and does not involve dominance. If a dog wants to go for a walk by exhibiting typical barks and tail wag behaviours, and the human responds by taking the dog outside, the dog has indeed controlled the human. Thus, Fido concludes he has some control over the outcome of the event because he made the human take him outside. That is not dominance, that is a symbiotic relationship established and maintained through social learning. 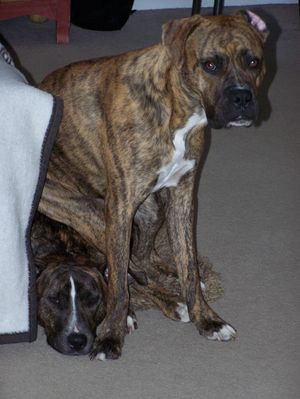 The Importance of Control
At the Dogue Shop, we purposefully teach dogs to take control of their environment because it prevents behaviour problems from developing in the first place. A dog that can make a human move away from a potential dog-dog interaction is less likely to act aggressively towards the incomer.

A locus of control allows dogs to experience a positive umwelt. The reason is simple, social cognitive learning and perceived control increases feel-good neurotransmitters and hormones. When you work and achieve a positive result, you feel a strong sensation of joy.

Imagine your latest successful accomplishment and how it made you feel. Did you experience joy, satisfaction, peace, or comfort? Did you rejoice in the achievement via self-gratifying behaviours like drinking a glass of wine or eating a piece of cake? If the answer is yes, then you know how your dog feels when he has some control over his life, especially when they lead to a positive outcome.

Locus of Control Training
The ability to control and avoid being control summarizes the life of any organism, plants included. In dog language, we talk about dominance and submission (all three types) as a means to an end of control, not as aggression or fearfulness. When dogs have a perceived sense of control, their emotions are less likely to escalate in either direction.

The takeaway message is to train and allow your dog to have some control over his life and environment. I know, old school dominance trainers will disagree since their philosophy is based on dogs wanting to control, AKA dominate our lives. I assure you, dogs are not out there to control or dominate our lives.