Someone asked me a pertinent question the other day: “Why do some trainers feel they need to dominate, punish, control, choke, or even electrocute* dogs?” The following is my summarised answer. As is the case with most of my articles, I invite you to comment but please leave your egos at the keyboard.

In Dog Training Profession – Part 3, I discussed different possibilities we could endeavour in order to standardize our profession. The purpose of today’s article is to open the discussion about the dog training profession. How does this piece tie in with the series on dog training? By exploring why we need recognition in the first place.

The entire question you saw above was in fact a series of questions that went like this: “If trainers love animals, which I believe they do, why do some trainers feel they need to dominate dogs, punish, control, choke, electrocute, or treat them with force and fear? I mean, we know dogs aren’t pack animals, so why treat them like wolves? Why don’t these people pursue their education?” The answer lies within the trainer’s motivation and education.

Motivation
Why are some trainers motivated to treat dogs as competitors who should be controlled is a valid question, and concern. Certain groups of dog trainers believe dogs are out to dominate humans; consequently, these disobedient canines require a firm hand in order to put them back into their inferior to a human place.

We know dogs aren’t pack animals, we know they don’t strive for world domination, and we unequivocally know dogs don’t need a firm hand. The only motivation which can drive a human to believe an animal, a much smaller animal (well maybe except Great Danes), can and would dominate them stems from human defence mechanisms: denial, repression, displacement, projection, reaction formation, regression, rationalization, sublimation, and identification.

Humans develop defence mechanisms in order to avoid emotional pain or control unacceptable inner drives, desires, urges, or feelings. Humans have many defence mechanisms in place, but we’ll stick to the projection for now. Humans unconsciously project onto their clients, the domestic dog, for many reasons, but the majority of the time the process evolves either from who we think we are or who we think we should be.

Education
Attachment and education greatly contribute to the creation of defence mechanisms. People with insecure type attachments combined with a lack of education (say in dog behaviour and training) will more likely revert to negative and punitive training approaches because they will unconsciously see themselves in their clients’ dogs. 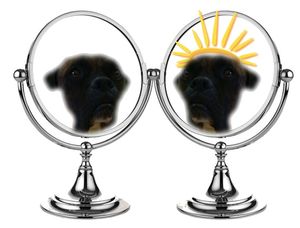 The only way one can stop the projection is to realize it exists. Once the defence mechanism is discovered, education, and possibly therapy, can contribute to its demise. One has to bring the once unconscious process into the realm of the conscious. To achieve defence mechanism recognition, a skilled professional uses a technique called mirroring. In essence, professionals send triggering emotions back to dog trainers to address motivations for their behaviours.

Dog trainers don’t use negative training methods and tools because they're bad people. I don’t believe dog trainers wake up one day and think today I’m going to choke or electrocute dogs for a living. I believe most dog trainers simply don’t know their inner-workings are playing them. Plus, we all know dog training isn’t regulated which contributes largely to poor, or lack thereof, education.

Dog Trainer Awareness
The problem with inadequate education is it’s self-sustaining, AKA self-reinforcing. Let me explain. If dog trainers point out to other dog trainers their techniques are outdated and wrong, the observation is perceived as an attack which, guess what triggers the defence mechanism observers are trying to avoid in the first place. By telling or calling out irresponsible, dangerous, or unethical practices, the well-intended observers just triggered and reinforced the defence mechanism system. Not only have they closed the door to change, but they’ve also justified resistance to it. 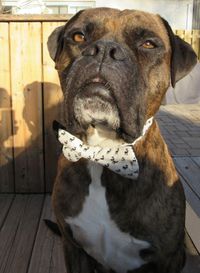 Pointing out inadequacies is not mirroring, it’s attacking. To mirror is to show the actual emotion occurring within the animal and let trainers see the truth for themselves. Once perception is achieved, the underlying emotions which motivate the defence mechanism can be challenged. Then, and only then, will we see changes in dog training practices?

Dog Social Learning
Social learning between humans and dogs will revolutionize the dog training industry because defence mechanisms will no longer interfere with learning. Dog training will be faster and behaviours will become more resistant to extinction.

The Dogue Shop team strongly believes in social learning and we're proud to have incorporated the theory into our practice over ten years ago. I sincerely hope you join us in building a brighter future for our furry friends. If anything, man's best friend deserves that much.