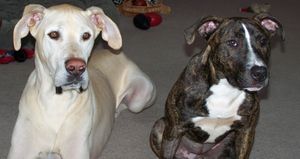 Statistically, the number of pet professionals who read my article each week represents approximately half of the people who visit my blog; consequently, I try to write about various topics to satisfy the wide range of readers that you are. It's not always an easy task. This week, I'll talk about the ABC model of behaviour for both professionals and non-professionals readers.

ABCs
The ABC model of behaviour is a simple to remember acronym which helps professionals identify the cue an animal follows to perform a behaviour. ABC also determines the consequence which results from the behaviour. The model can be used to train new behaviours or to modify old ones. To understand the model, let me explain the acronym.

A= Antecedent: cue, signal, sign, word or condition that influence the occurrence of the behaviour. Basically, it's what happens right before the behaviour is performed.

B= Behaviour: any action that can be quantified or qualified. Basically, it's the actual performance of an activity.

C= Consequence: outcome that occurs immediately following the behaviour. Basically, it's what happens right after the behaviour is performed.

Here's an example. The dog sits at the door and barks. You go to the door, open it, and let the dog out. The dog exits and immediately urinates. We know the pressure on the bladder prompted the dog to go to the door and bark, so the antecedent is bark at the door, the behaviour is exit and pee, and the consequence is bladder release, or simply put, the dog feels relieved. In this example, we can say that bark is the cue to urinate which makes the dog feel good; consequently, the dog will bark at the door again when it needs to urinate. The example is simple and straightforward, but what happens when it's not. 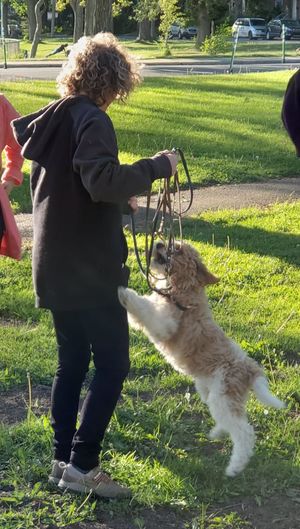 Behaviour Problem
Here's a more complex example. Let's see if you can solve this one. Fido and Rex play in the yard. Fido escapes from the yard and runs around the neighbourhood for about an hour before he returns. He does this a few times a week. Rex never leaves the yard. You are called to modify Fido's escape behaviour because he could get stolen or injured. The client doesn't want to chain Fido because he plays with Rex most of the time and stays in the yard.

What questions would you ask? What training plan would you implement to keep Fido in the yard without leashing him? With the ABC model it becomes obvious we need to learn more. We need to identify the A= Antecedent before we can address the behaviour and its consequences.

Behaviour Modification & Training Plan
If I can't observe the antecedent, it might be wise to ask the client to film the dog. The client could follow the dog to see where and what he does during outings. In this case, a GoPro camera might come in handy. If I can't observe the antecedent, the ACB model falls apart. Without motivation or signal to perform the behaviour, it becomes almost impossible to establish a functional behaviour modification or training plan.

The basics are often the easiest and most efficient ways to address dog issues. I suggest you film your dogs and start practicing behavioural analysis. What was the dog doing right before the behaviour? and what happened right after the behaviour? This simple little exercise teaches you the intricate workings of your dog's mind.