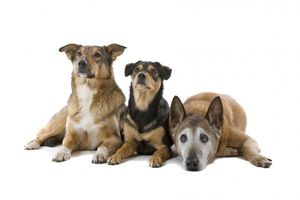 I get daily emails and private messages about dog deaths within the same household. You can read when or why dogs kill other dogs here and here. The articles discuss some of the more common reasons canines kill dogs they were living with for some time. Today, I want to add a very important notion about dogs you might not know. I am referring to the invisible spaces that govern non-verbal behaviour.

Canine Spaces
Dogs live under one rule: live to see another day. Consequently, dogs evolve under invisible spaces that serve to protect and keep them alive. The three spaces have names and functions, which, I will describe in a minute. First, I want to establish dogs are not pack animals. They are not wolves; therefore, dogs do NOT function socially like wolves. Yes, canids share behavioural similarities, but they all evolve in different niches. Dogs evolve in a niche that does not require cooperation to hunt; consequently, dogs are solitary animals that come together for specific needs but do not live together. 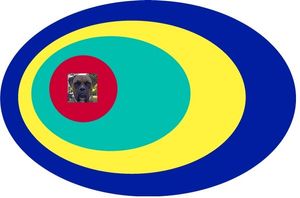 Second, humans created dogs for humans, not other dogs. The human-dog social bond outranks the dog-dog social attraction. Many scientific experiments demonstrate that dogs follow human cues more easily than their wild counterparts do. Dogs actually seek assistance from humans, not other dogs, to solve problems. The proof is in the pudding, when the ball rolls under the sofa, my dog asks me for help, not my other dog.

Back to the topic. The three spaces are critical, social, and public. The red circle represents my dog Albear. The critical space is in light blue. It is calculated from the tip of the dog’s nose to the end of its back, excluding the tail and projects outward all around the dog, just like an invisible bubble. The yellow space is the social space and it stretches outward from the dog to approximately 150’, which is 45.7m in metric. Finally, the public space of a dog extends to approximately 1.5 miles or 2.4km. 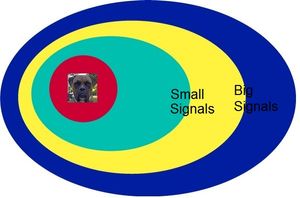 Reasons for Communication
Dogs have adapted their language to accommodate these distances. Their language evolved to fill in the gaps, so to speak. Think about it for a minute. If you were far away from a friend and tried to signal her with your eyes I'm over here! would your friend see you? Most likely not. You would need a bigger signal like a fully extended arm waving in her direction. Conversely, if you are next to each other, the arm signal will appear out of context; therefore, you will make a small signal, say from your eyebrows, to signify follow me.

Dogs have adapted their language in the same manner. If a dog perceives a conflict at the extremity of his social space, breaking eye contact will not work. At a far distance, the dog needs to adapt his communication. In this case, he would likely lower his tail and ears. If the dogs are next to each other, breaking eye contact is more appropriate. To summarise, big signals, aka behaviours, communicate information to far away dogs while small signals communicate information up close.

Dog Overcrowded Households
You probably realized while reading that a house can become overcrowded with two or more dogs, especially if the dwelling is small and the dogs are large. For an untrained eye, dogs might seem to live in harmony, yet as a professional, I see dogs displaying displacement behaviours, stress signals, agonistic postures, and so on. Silent conflicts often take place in front of humans, but when people are absent, dogs settle their unresolved quarrels and conflict resolution frequently leads to death. If you have a strong stomach, watch this video (very graphic, but not gruesome). It will give you an excellent understanding of how silent conflicts can occur in front of your eyes, and how powerless we are to solve them. Then, imagine all this occurring while you stepped out.

The best way to avoid overcrowding is to evaluate the size of the house, dogs, and the history of the animals. Dogs that have had past conflicts, with an injury history, are more likely to exhibit aggressive behaviours again and most likely with an escalating response. The following image demonstrates the space required for two medium-sized dogs to coexist comfortably. This means each room the dogs find themselves in would need to be minimally 6’ by 12’ or 1.8m by 3.7m. A two-bedroom house surface would have to be no less than 1152ft2 (ft2 = square feet) or 107m2 (m2 = square meters). These measurements only refer to critical spaces, ideally, dogs would require a house that covers their social space needs. That would make for a very BIG house; actually, it represents a 22 500ft2 or 2090.3m2 building. 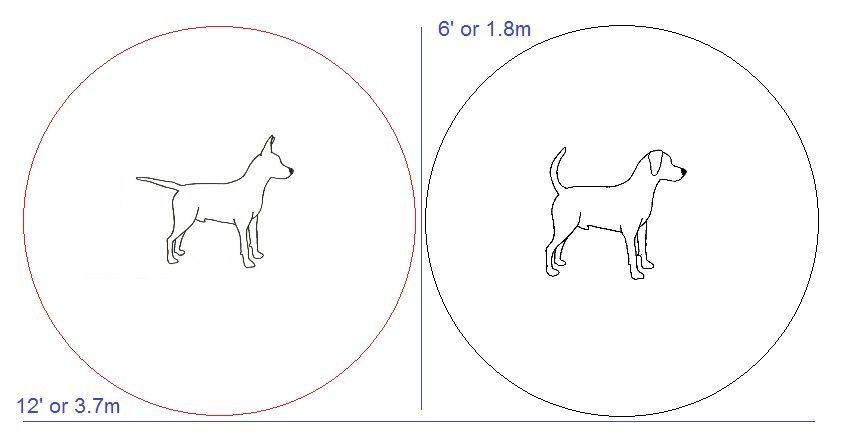 Last Considerations
Before you embark on a journey that involves multiple dogs in your house, please consider their space requirements. For each comment I receive on the articles mentioned in the introduction, I receive two emails about unnecessary deaths. Approximately a quarter of the people who write to me have witnessed the death of their beloved pets. These traumas are lifelong lasting and most cases end with the death of the attacker/s, so in reality, two or more dogs have died because of overcrowding. If you watched the video, you now know you will never be fast enough to curb the death of a dog nor could you stop the attack. The average time it takes dogs to kill animals smaller than themselves is approximately 3-5 seconds. Yes, seconds. Canines are very efficient predators; never forget that, and never assume My dog would never do that! Avoid dog overcrowding through prevention, for it remains by far the best medication.