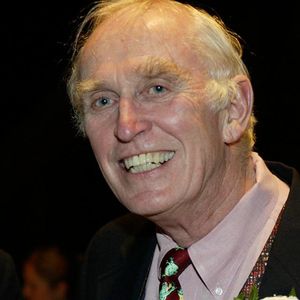 If you haven’t heard the news already, Raymond Copping died on August 14th at the age of 80. Ray left his family, friends, dog professionals, colleagues, researchers, and students too soon if you ask me. If you didn’t know Ray, you certainly missed out on a wonderful person and scientist. We exchanged on and off throughout the years. Sometimes we talked about dogs, OK, we mostly talked about dogs, but oftentimes we talked about life and our experience of it. This piece is for him.

I first met Ray was in 2003. I say first because I met him a second time for the first time, in person that is, later the same year. I was scheduled to translate his weekend conference on the evolution of dogs, so we met online first. The topic covered his then-popular book: Dogs. We exchanged messages back and forth on terminology and evolution concepts to help me master the content and offer a high-quality translation.

When we talked over the phone, our conversations often ended off-topic. Ray and I would talk about our lives, our dogs’ lives, and our role in it. He would ask me complex questions that made me think. The hardest question he asked during those discussions was Why did you wait so long? He asked the question not for him but for me. He wanted me to reflect on why I had waited so long to live my passion. I would later discover, Ray always wanted me to think, and at that, he succeeded.

The second time I met Ray, it was for the actual weekend conference. When we met, it felt more like a reunion than a meeting. Needless to say, we hit it off. I meet Lorna, his wife, and the three of us talked about a lot of stuff during that weekend, OK we mostly talked about dogs. We discovered our mutual fondness for wolves, dogs, beer, writing, and storytelling. When the weekend ended, it was hard to say goodbye.

We parted knowing we would stay in contact, but somehow, it didn’t make it any easier. When I got home that night, I felt changed inside. Ray had that superpower, you know, the one where he transforms into a little bug that crawls into your brain and makes you think and do things. He also had the freeze superpower. People would go about their business and Ray would say something outrageous that made everybody freeze and look at him. I will miss that the most. 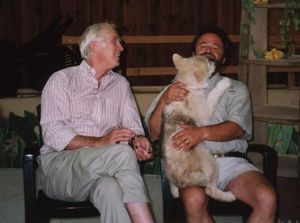 The last fourteen years have been a blessing, and thanks to Ray’s persistent recommendation, I met an awesome group of wolf people. I don’t go to Wolf Park as often as I wish I could, but when I do, I remember Ray’s voice Go to Wolf Park! as I enter the premises. You never know the impact you have on someone’s life until it’s often too late. Ray has certainly changed my life. Wolf Park has also greatly influenced who I am, and I’ll make sure to tell them one by one.

Ray sent regular emails to check on me. He would drop a one-liner like What are you doing now? Explain the universe in 200 words, and my all-time favourite, Tell me a story. I would write elaborate stories about my life with a different theme each time. Sometimes, Ray gave me a grade. The following is an excerpt from a 2016 email.

I love your e-mails. Your few words make me laugh and think at the same time, not an easy feat when it comes to these two responses of mine.

What am I doing now?

In the realm of once upon a time, a beautiful princess lived in a time where fast-paced lives and stress-ridden bodies ruled the land. The princess told a story which to this day is remembered by all. In a time not so long ago, there was much ado about a native sorceress who could talk to the mighty Adlet. The sorceress was already juggling multiple employments when the mythical creature came and tried to persuade the sorceress to bestow upon humanity the book of languages.

The task was a destitute attempt to merge incompatible ideologies, or so it seemed. On one hand, the sorceress knew the codex would change the kingdom forever. On the other hand, she knew the time would only accelerate once she found herself taken by the manuscript.

In this kingdom, the speed at which time passed was not the same as in other worlds. The writing of such a codex meant certain banquets would be omitted. Saddened was the hag. Her desires were not congruent with her heart's desires. The manipulation of time was beyond her powers and to make du with the devil's request would require a change in her almanac.

The native sorceress took on the task and began the composition of Adlet's prose. To this day, the sorceress still implores the mighty powers above to slow down time or decapitate slayers who, to the king's profit, kill time passages and replace them with false ideological pretences.

To which Ray answered, amongst other things, Gaby -- great essay -- I can just see that "native girl."

Other messages were more personal in nature and most often revolved around writing. I remember telling Ray about my crazy idea. Little ole me, a dyslexic person, wanted to write a book. He thought it was a marvellous idea and never made me forget. I’m almost done with the book and wish I could have given him a copy. He knew what the topic is about and one day, when you read it, you’ll know why his encouragement was a blessing. I learned one thing from Ray and it’s never, ever, think within the box. For that life lesson, I’m forever grateful.

A few years ago Ray broke his leg pretty bad. I remember our discussion as if it were yesterday. He started the conversation with his freeze superpower one-liner You owe me another zoo jacket! Obviously, I went What?! He told me about the ordeal and I cried, sometimes of laughter, sometimes of sadness. That event wasn’t easy for him.

In retrospect, Ray was the kind of person you only meet once in a lifetime. He was a genuine human being who cared about people and animals. He loved to read about dogs but loved to write about them even more. He is, was a generous and kind scientist who cared about research and what each person could bring to the table. He was also compassionate when it came to my stories and rants.

My students have heard me talk about Ray over the years; I just hope they got to know him a little through me. I will miss his encouragement and dedication to my passion, our passion. I will miss his emails, his lists of people to contact, his writings, his knowledge, but most of all his contagious desire to educate. They say what goes around comes around, Ray certainly made sure of that.